Hey friends! Today is my stop on the blog tour for Dying for LA by Ian Jones and I am bringing you an extract. Enjoy! 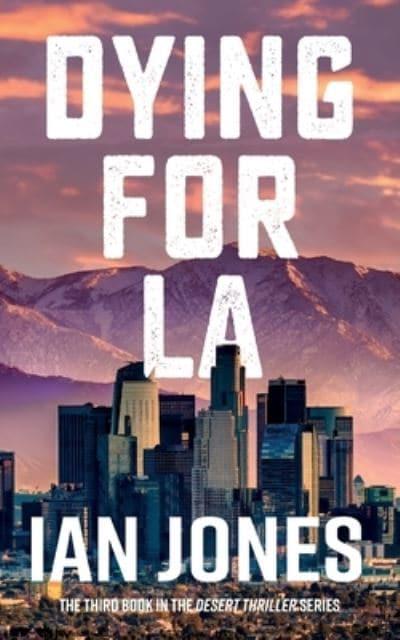 Dying for LA by Ian Jones
Genre: Thriller
Published by: Clink Street Publishing
Pages: 356
Release date: 18/03/2021
Where to find: Amazon
Summary: The wrong place at the wrong time. That’s where John Smith finds himself in Downtown LA one Sunday evening; next he’s working with the LAPD, CIA and the FBI to track down an elusive group who are responsible for an ever-increasing number of murders in the city.

On top of not knowing who they are, or how many, one of the group is talking.

Everything was calm and serene, people were just waiting patiently for the train, it was the end of the weekend, time to be at home.

Suddenly there was a shout, followed by a shrill scream, then another, louder. More shouts. Sudden panic and yelling all coming from where a set of stairs descended. John turned to look and saw a man running fast down the platform toward him, his mouth wide open. Behind him were two men in pseudo-combat uniforms, moving stealthily forward and aiming assault rifles and he could see more similarly dressed figures visible behind. John didn’t think twice; he didn’t stop to wonder what was going on or if there was anything he could do, he instantly threw himself down against the wall he was leaning on, into the corner tight to against the floor just as the guns started firing single shots; repeatedly, deafeningly loud in the confined space, sounds of breaking glass and ricochets and then silence. Muffled sobs, footsteps, and then more shots, closer this time and then a loud thump.

Silence again. More footsteps, then another couple of single shots.

Then rapid fire, a short burst, forward to where John was lying, two guns that were moving, bullets suddenly blasting and raking across the wall then into the floor. A chunk of thick tile shot up and struck him hard on the forehead. He screwed his eyes up in pain and could feel warm blood running down. Footsteps moving cautiously close by. Short muffled conversation. Slowly, carefully, John moved his head to look. He could see the body of the woman who had dropped her phone lying on her side, and another close by. Impossible to tell if they were alive or dead. Next to them there was a pair of scuffed combat boots, then another pair appeared, walking hesitantly, and stopped. Two men were standing there together. One of them put down an AK-47, leaning it against the wall right where John had been standing. John could see it in his peripheral vision. His instincts took over. It was an old original model, wooden stock. It looked well cared for, and fitted with a standard magazine. Thirty rounds. The gun had been placed with the selector lever facing him, he could see it was set to single. There was a carving in the stock near the shoulder rest; 1-Too. It rang a bell, but he couldn’t place it. But there was only one important thing: and that was there was a gun. Right next to him.

How many shots have been fired?

Would the magazine have been full in the first place?

Had this gun even been used at all?

If not, did it operate?

How many men were there in total? He could see the two for sure, and could hear at least one voice calling from further away.

He moved his eyes again, careful not to move his head. The two men were facing each other, side on to him. There was rattling, and then a bag dropped to the floor. It was the bag the woman had been holding.

‘Nothing?’ he heard one man ask with a heavy accent.

‘Nothing there,’ was the reply.

Then a shout from one of the men, a couple of words, in a language John had heard before but couldn’t place. A shout in return from a distance, and then another from the same place but moving away. Then the bag was kicked hard, and it skittered away, scattering its contents across the floor.

Muted conversation, and a different bag was kicked heavily. One set of feet turned away slightly, then the other. More muttered conversation, then raised voices, cursing, not in English.It was clear the men were annoyed about something, distracted.

John grabbed his chance. Do or die

Ian has always enjoyed writing, originally working on black comedies. But he could never complete them, always suddenly realising he had written himself into a corner. He decided to try something different and wrote his first thriller ‘The Handsome Man’, a story about a hitman who travels to London from New York to do what should be a simple job, which spirals out of control. Ian then starting writing a second novel introducing John Smith, and a visit to Las Vegas for work provided all the inspiration that he needed. To date Lost in Vegas, North of the Rock and Dying for LA are published; he is working on the next book in the series. He has several other novels completed but not published.

So far the feedback and reviews he has had have all been very positive. People appear to like his books, which he is very happy about.

Ian has worked all his life; his dream is to be able to be a full time author but is a realist so he is happy writing whenever he has time. He lives in South West London with his family.

He has a passion for motorbikes and music.

Where else to find me