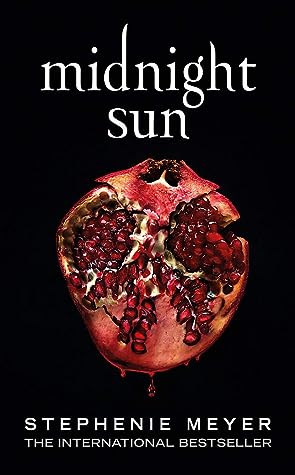 Midnight Sun by Stephenie Meyer
Series: The Twilight Saga #5
Genre: Paranormal
Published by: Atom
Pages: 768
Release date: 04/08/2020
Rating: ★★★☆☆
Where to find: Goodreads | Waterstones
Summary: When Edward Cullen and Bella Swan met in Twilight, an iconic love story was born. But until now, fans have heard only Bella’s side of the story. At last, readers can experience Edward’s version in the long-awaited companion novel, Midnight Sun.

This unforgettable tale as told through Edward’s eyes takes on a new and decidedly dark twist. Meeting Bella is both the most unnerving and intriguing event he has experienced in all his years as a vampire. As we learn more fascinating details about Edward’s past and the complexity of his inner thoughts, we understand why this is the defining struggle of his life. How can he justify following his heart if it means leading Bella into danger?

This was a very interesting reading experience for me. On the one had, all my nostalgia from my Twilight days came right to the top, and I really enjoyed being back in the story, but on the other hand I had so many issues with this book, and if it wasn’t for my nostalgia, I probably would have DNFd it.

Going into it, I thought it might be quite interesting to see the story from Edward’s point of view. Some parts of it were interesting, especially since Edward can read minds, so in Midnight Sun we get to see what quite a lot of people are thinking about a situation. There were times, though, where being inside his head was boring and monotonous and cringy, and even a bit scary.

Edward spent most of the book speaking in metaphors and moping and spending pages reminiscing on something from his past that the current situation reminds him of. It’s really no wonder that Edward’s book is twice as long as Bella’s book.

Edward was even more creepy and problematic and toxic when you could see inside his head. I have so many quotes that I found so creepy. For example, when Edward first goes into Bella’s room at night to watch her sleep, his inner monologue as he justifies it to himself is not okay. He goes through all the various crimes his family commits as part of his life style, including forging documents and murder.

Then why should I feel so guilty over one little misdemeanor? Human laws had never applied to me. And this was hardly my first adventure with breaking and entering.

At one point, one of his thoughts is the actual definition of gaslighting. I can’t find the quote now, because I forgot to mark it (whoops!) but it was something along the line of Edward being good at convincing people their memories were wrong.

Despite all that, I still gave this book 3 stars, and that is mostly because of the nostalgia and the massively addicting quality of the Twilight books. I literally could not stop listening to this book until I had finished it. I was insanely engrossed. I’ve also got to a point now where I’m not a hard core Twihard anymore, now I mostly just enjoy the story by not taking it seriously. I spent a lot of this book laughing at it.

To be honest, I wouldn’t recommend this book to anyone unless they were die hard Twilight fans, because otherwise I don’t think you would like it.