Hey friends. Today is my stop on the blog tour for Entanglement by Peter Hodge and I am bringing you a guest post. Enjoy! 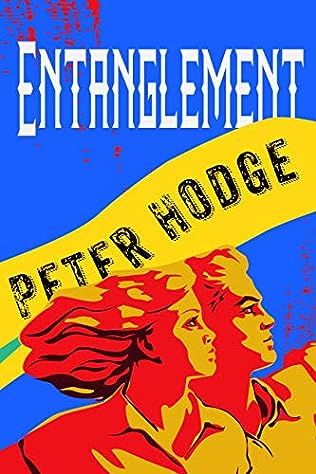 Entanglement by Peter Hodge
Genre: Thriller
Published by: Clink Street Publishing
Pages: 290
Release date: 29/10/2020
Where to find: Goodreads | Amazon
Summary: This is a story where Western values meet’s the volatility of Eastern Europe, in the throes of revolutionary change – where an elite’s vision of righteousness, is another’s contempt; all merged into a maelstrom of anger and violence.

Such events, exposes humanity to its rawest form, from the glorious rollercoaster of love, to the ugliness of political violence, motivated by the greed of oligarchs, who never see, or taste the blood of those who pay the price for their egos.

In such a kaleidoscope of political and emotional upheaval, two people find commonality and a route to survival through a mutual desire for love.

From the highest levels of Government to the vile instincts of bitter men, a Norwegian man and an Eastern European woman, navigate the violence and volatility of a nation that is uprising against their rulers – all against a backdrop of foreign interference.

Seen through different eyes, the story describes the beauty of a city and its people that is in turmoil, as revolution encompasses every aspect of normal life; where violent death and compassion become interwoven bedfellows, when martyrdom gives way to peace..

What I like about Marius, is his naivety and belief that his search for love will over come all the hurdles that life throws at him.  Like all of us, he’s a flawed character and probably underestimates the hurdles that will confront him. But he is brave enough to leave his comfort zone; to leave behind certainty and familiarity of his home country and explore another’s society.  He has a self-belief that he can find a love that he believes will bring him happiness. His natural empathy, gives him the strength to experience others and a self-belief that he can make the right choices in any community.

Marius believes in destiny; that there is some innate drive within him that steers him in certain directions. This drive and belief that there is a roadmap laid out for him, guides his every action; and off he goes blindly into the unknown, with only the faintest glimpse of something intangible in his thoughts to follow. Yet, despite setbacks, his unquestionable self-belief in his guiding hands, keeps his hopes and dreams alive – and onward he goes.

He’s undoubtedly a dreamer and believes the dreams can come true, if one only listens to one’s inner-self. But his aspirations for finding his utopia are not shared by others; his sister thinks him a little mad; work colleagues thinks he’s in a mid-life crisis, (he probably is).  He sees his life passing him by – with no rhyme or reasons; just on a treadmill of life; a life that complies with rules, societal norms and work that establishes a path from cradle to grave. It was all beginning to feel rather pointless to him.

In his search for a meaning to his life, Marius’s beliefs and character traits within a dystopic world, exposes him to all the ugliness of a place where the evolution of powerful men is dominated by money, power and insatiable greed.  Yet, even though he can see and smell the tumultuous upheaval of a country’s people determined to fight for change, he finds a like-minded woman, whom lets him see the kindness and moralistic side of the ordinary people of her nation; which is far-removed from the violence that permeates the city streets of Kiev as revolution takes hold.

Marius is an endearing example of someone whom has an unquestionable belief in the good that lies at the heart of people; he’s an example of a human being whom is irreconcilably opposed to the status quo, of societies based upon unrestrained capitalism; and the inherent greed that follows the philosophy of money and all the trappings that go with it.

But Marius, despite all the hurdles that confront him, his belief in some universal wisdom; some guiding principles that will help him through the maelstrom of life; if he just listens, will be his saviour and lead to his utopia and find true love. It’s as if, just believing the messages in his head, if he follows the advice, will ultimately steer him to his only desire; to love and be loved.

In my youth, I had a wanderlust for the next horizon and trained as a Marine Radio Officer in the UK Merchant Marine, to see the world. The training was the most valuable technical education that has held me in good stead ever since. But more importantly, working for many months in close-proximity to others in the confinements of a ship, was my greatest experience in life.  There’s no escaping yourself under such circumstances; this was where I really found who I was; and began to understand other’s emotions and motivations.

My first job as a Junior Radio Officer, was with an old British Company in Hong Kong. In the seven years that I worked on many vessels, I travelled to many countries and witnessed many things that the folks back home would never believe. After the navy, I undertook business training and gained a mixed degree in science and technology with the wonderful Open University. I then became incorporated with the Engineering Council of UK as a Professional Engineer. I have lived and worked in Lagos, Johannesburg, Doha, Singapore, Oslo and travelled extensively in the Americas and Eastern Europe in my work; hence, I have many stories and anecdotes and experiences to draw upon for my writing.   I still work as an Engineer and Project Manager.