Hey friends. Today is my stop on the blog tour for Poisoned by Jennifer Donnelly and I am sharing my review with you. Enjoy! 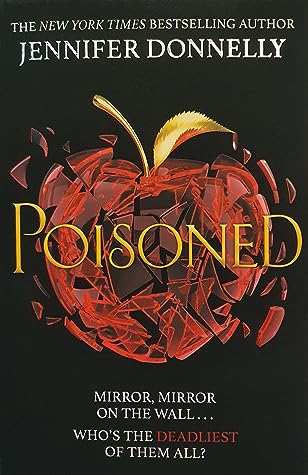 Poisoned by Jennifer Donnelly
Genre: Young Adult | Retelling | Fantasy
Published by: Hot Key Books
Pages: 432
Release date: 20/10/2020
Rating: ★★★★☆
Where to find: Goodreads | Waterstones
Summary: Beautiful Sophie, with lips as red as blood, skin as pale as snow, and hair as dark as night, is about to come of age and inherit her father’s throne. But Sophie’s stepmother wants rid of her – beautiful she may be, but too weak and foolish to reign. And Sophie believes her, as she believes all the things that have been said about her – all the poisonous words people use to keep girls like her from becoming too powerful, too strong.

When the huntsman carries out his orders of killing Sophie, she finds a fire burning inside her that will not be extinguished, and sets off to reclaim what was taken from her.

Jennifer Donnelly turns her feminist eye to this most delicious of fairy tales and shows Snow White as she’s never been seen before.

*I was sent a free review copy by the publisher. All opinions are my own.*

This is the first Snow White retelling I have ever read, so I was really excited going into it to see where it would go. I ended up really enjoying this interpretation of the story. I thought it was super interesting, and I really liked how obviously inspired by Snow White it was.

I thought it had some really unique and interesting elements, and they really made me enjoy the story more. I’m not going to say what they are because I don’t want to spoil you!

I did really like the main character, Sophie, but I did find some of her decisions frustrating at times. They did make sense within the story though, so they didn’t bother me too much.

This is the first of Jennifer’s books I have read, and I am now really keen to pick up more of her books, especially Stepsister.

It is YA, but it does read a bit on the younger side of YA, so keep that in mind if that is something that bothers you.

Overall, I had a really enjoyable time reading this book, and I would definitely suggest checking it out if you enjoy YA retellings.

Jennifer Donnelly is the author of seven novels and a picture book for children. She grew up in New York State, in Lewis and Westchester counties, and attended the University of Rochester where she majored in English Literature and European History.

Jennifer’s first novel, THE TEA ROSE, an epic historical novel set in London and New York in the late 19th century, was called ‘exquisite’ by Booklist, ‘so much fun’ by the Washington Post, a ‘guilty pleasure’ by People and was named a Top Pick by the Romantic Times.

Her second novel, A GATHERING LIGHT, won the Carnegie Medal, the Los Angeles Times Book Prize, the Borders Original Voices Award, and was named a Printz Honor book. Described as ‘rich and true’ by The New York Times, the book was named on the Best Book lists of The Times (London), The Irish Times, The Financial Times, Publishers Weekly, Booklist and the School Library Journal.

REVOLUTION was named a Best Book by Amazon, Kirkus, School Library Journal, and the Chicago Public Library, and was nominated for a Carnegie Medal. The audio edition was awarded an Odyssey Honor for Excellence.

In 2014, Jennifer teamed up with Disney to launch the bestselling WATERFIRE saga, an epic series about six mermaids on a quest to rid the world of an ancient evil. The first book in the series, DEEP BLUE, was released in May, 2014; the second book, ROGUE WAVE, launched in January 2015.