Hey guys. Today I am bringing you this weeks Stacking the Shelves. Stacking the Shelves is a weekly meme hosted by Tynga’s Reviews and Reading Reality. All you have to do is share what books you got in the previous week. You can find more information here. Read on to see all the books I have acquired recently. I only got one book this week (I know, shocking) so this will be a short post. 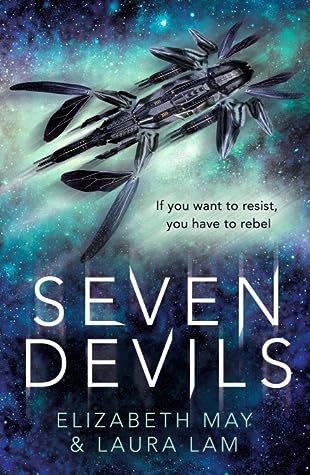 Seven Devils by Elizabeth May and Laura Lam

This first book in a feminist space opera duology follows seven resistance fighters who will free the galaxy from the ruthless Tholosian Empire — or die trying.

When Eris faked her death, she thought she had left her old life as the heir to the galaxy’s most ruthless empire behind. But her recruitment by the Novantaen Resistance, an organization opposed to the empire’s voracious expansion, throws her right back into the fray.

Eris has been assigned a new mission: to infiltrate a spaceship ferrying deadly cargo and return the intelligence gathered to the Resistance. But her partner for the mission, mechanic and hotshot pilot Cloelia, bears an old grudge against Eris, making an already difficult infiltration even more complicated.

When they find the ship, they discover more than they bargained for: three fugitives with firsthand knowledge of the corrupt empire’s inner workings.

Together, these women possess the knowledge and capabilities to bring the empire to its knees. But the clock is ticking: the new heir to the empire plans to disrupt a peace summit with the only remaining alien empire, ensuring the empire’s continued expansion. If they can find a way to stop him, they will save the galaxy. If they can’t, millions may die.

I am SO excited to read this book. It sounds amazing and I’ve seen a lot of hype for this book. This was also the July Illumicrate book, so I’ve got a pretty pick edition with sprayed edges heart eyes

What have you hauled recently? Let me know!