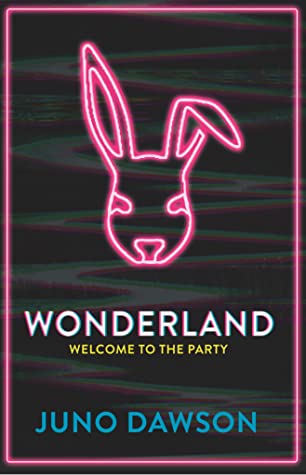 Wonderland by Juno Dawson
Genre: Contemporary
Published by: Quercus
Pages: 286
Release date: 28/05/2020
Rating: ★★★★☆
Trigger warnings: Mental health, self harm, suicide, sexual assault, drug use, murder
Summary: Alice lives in a world of stifling privilege and luxury – but none of it means anything when your own head plays tricks on your reality. When her troubled friend Bunny goes missing, Alice becomes obsessed with finding her. On the trail of her last movements, Alice discovers a mysterious invitation to ‘Wonderland’: the party to end all parties – three days of hedonistic excess to which only the elite are welcome.

Juno Dawson has very quickly become one of my favourite authors, especially with her three most recent novels, known as the London Trilogy. Just a note, you don’t have to read them in order, they are all completely separate stories, they are just set in the same universe and they feature some cameo’s of characters from each book.

This book was so gripping and addicting. I read the second half of the book in one sitting because I didn’t what to put it down.

This also had a lot of the magical, whimsical feel of Alice in Wonderland in places, and I thought it was done so well. At times it really did feel like I was reading a fantasy novel, but in a good, fun way.

I liked that the story had a focus on Alice coming to terms with herself. She grew so much throughout this book, she became so much more comfortable in her own skin, and it was really nice to read about.

This book has LGBT+ rep, including a pansexual character, a lesbian character, and it is an own voices trans novel, as both the author and the main character are transgender.

If you’ve read Clean or Meat Market by Juno Dawson, you probably don’t need me to tell you to read this book. If you haven’t read those books, and you enjoy reading books about rich, privileged teens, then I highly recommend Wonderland, as well as Clean and Meat Market. I normally really don’t like books about rich, privileged teens, especially when there is drug use, but when Juno does it, I love it.

Where to find Wonderland

My review for Margot and Me by Juno Dawson

Review: You Must Be Layla by Yassmin Abdel-Magied