Hey guys. Today I am sharing with you my top 10 most anticipated 2020 releases. I thought I would just do my top 10 because otherwise this post would be ridiculously long! I have put these in order of release date. Also, please be aware that some of these are sequels, so the synopsis may have spoilers if you haven’t read the rest of the series. Enjoy! 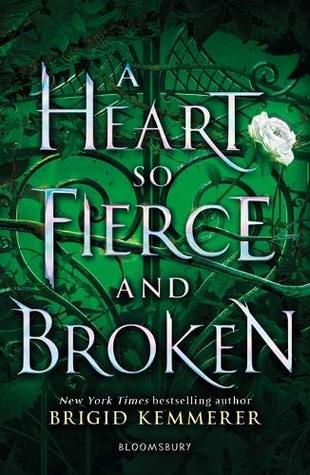 A Heart So Fierce and Broken by Brigid Kemmerer

Harper has freed Prince Rhen from the curse that almost destroyed his kingdom. But all is not well; rumours are rife that there is a rival heir with a stronger claim to the throne and that ‘Princess’ Harper of Disi is nothing but a fraud.

Grey has fled the castle carrying a terrible secret. When he is discovered by soldiers and returned to Ironrose by force, Grey’s allegiances begin to shift. And as he grows closer to an enemy princess, he is forced to decide whether he will stand against Rhen for the crown he never wanted.

The Hand on the Wall by Maureen Johnson

Ellingham Academy must be cursed. Three people are now dead. One, a victim of either a prank gone wrong or a murder. Another, dead by misadventure. And now, an accident in Burlington has claimed another life. All three in the wrong place at the wrong time. All at the exact moment of Stevie’s greatest triumph . . .

She knows who Truly Devious is. She’s solved it. The greatest case of the century.

At least, she thinks she has. With this latest tragedy, it’s hard to concentrate on the past. Not only has someone died in town, but David disappeared of his own free will and is up to something. Stevie is sure that somehow—somehow—all these things connect. The three deaths in the present. The deaths in the past. The missing Alice Ellingham and the missing David Eastman. Somewhere in this place of riddles and puzzles there must be answers.

Then another accident occurs as a massive storm heads toward Vermont. This is too much for the parents and administrators. Ellingham Academy is evacuated. Obviously, it’s time for Stevie to do something stupid. It’s time to stay on the mountain and face the storm—and a murderer.

Yes No Maybe So by Becky Albertalli and Aisha Saeed

Jamie Goldberg is cool with volunteering for his local state candidate – as long as he’s behind the scenes. There’s no way he’d ever knock on doors to ask people for their votes…until he meets Maya.

Maya Rehman’s having the worst Ramadan ever. Her best friend is too busy to hang out, her summer trip is cancelled, her parents are separating and now her mother thinks the solution to her problems is political canvassing – with some awkward guy she hardly knows …

Going door to door isn’t exactly glamorous, but maybe it’s not the worst thing in the world. After all, the polls are getting closer – and so are Maya and Jamie. Mastering local activism is one thing. Navigating the cross-cultural crush of the century is another thing entirely. 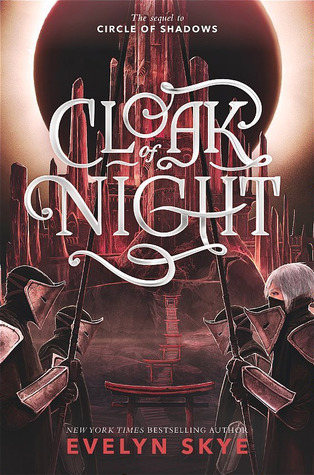 Cloak of Night by Evelyn Skye

After the devastating Ceremony of Two Hundred Hearts, Sora, Daemon, Fairy, and Broomstick are truly alone in the fight to save their kingdom. Empress Aki is missing, and everyone else who could help them is a prisoner to Prince Gin’s mind control.

At least Sora understands what they’re up against. Or so she believes, until she overhears Gin bargaining with the god of war for immortality and learns that ryuu magic may be a more insidious danger than she realized.

Suddenly, the stakes are higher and even more personal for Sora—not only must she stop a seemingly indestructible Prince Gin, but she must also unravel the secrets of ryuu magic before it is too late for nearly everyone she loves.

Sora Daemon, Fairy, and Broomstick face dangerous obstacles at every turn, but the greatest challenge may be discovering who they truly are and what, if anything, they are capable of.

The fate of a kingdom rests in their hands. 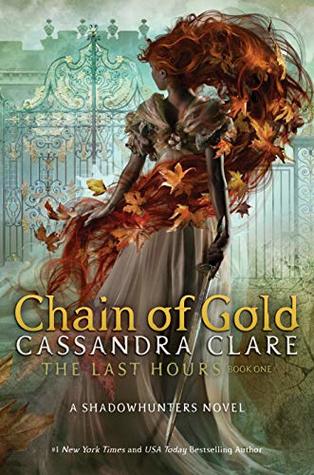 Chain of Gold by Cassandra Clare

Welcome to Edwardian London, a time of electric lights and long shadows, the celebration of artistic beauty and the wild pursuit of pleasure, with demons waiting in the dark. For years there has been peace in the Shadowhunter world. James and Lucie Herondale, children of the famous Will and Tessa, have grown up in an idyll with their loving friends and family, listening to stories of good defeating evil and love conquering all. But everything changes when the Blackthorn and Carstairs families come to London … and so does a remorseless and inescapable plague.

James Herondale longs for a great love, and thinks he has found it in the beautiful, mysterious Grace Blackthorn. Cordelia Carstairs is desperate to become a hero, save her family from ruin, and keep her secret love for James hidden. When disaster strikes the Shadowhunters, James, Cordelia and their friends are plunged into a wild adventure which will reveal dark and incredible powers, and the true cruel price of being a hero … and falling in love. 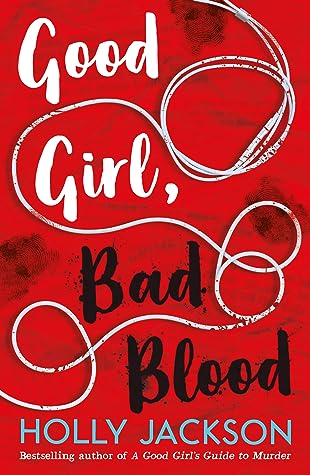 Pip Fitz-Amobi is not a detective any more.

With the help of Ravi Singh, she released a true-crime podcast about the murder case they solved together last year. The podcast has gone viral, yet Pip insists her investigating days are behind her.

But she will have to break that promise when someone she knows goes missing. Jamie Reynolds has disappeared but the police won’t do anything about it. And if they won’t look for Jamie then Pip will, uncovering more of her town’s dark secrets along the way… and this time EVERYONE is listening. But will she find him before it’s too late?

First, the bad news: an ancient evil—you know, your standard consume-all-life-in-the-galaxy deal—is about to be unleashed. The good news? Squad 312 is standing by to save the day. They’ve just got to take care of a few small distractions first.

And the cadre of illegit GIA agents with creepy flowers where their eyes used to be, who’ll stop at nothing to get their hands on Auri.

Then there’s Kal’s long-lost sister, who’s not exactly happy to see her baby brother, and has a Syldrathi army at her back. With half the known galaxy on their tails, Squad 312 has never felt so wanted.

When they learn the Hadfield has been found, it’s time to come out of hiding. Two centuries ago, the colony ship vanished, leaving Auri as its sole survivor. Now, its black box might be what saves them. But time is short, and if Auri can’t learn to master her powers as a Trigger, the squad and all their admirers are going to be deader than the Great Ultrasaur of Abraaxis IV.

Empire of Gold by S.A. Chakraborty

After a brutal conquest stripped the city of its magic, Nahid leader Banu Manizheh and her resurrected commander, Dara, must try to repair their fraying alliance and stabilize a fractious, warring people.

But the bloodletting and loss of his beloved Nahri have unleashed the worst demons of Dara’s dark past. To vanquish them, he must face some ugly truths about his history and put himself at the mercy of those he once considered enemies.

Having narrowly escaped their murderous families and Daevabad’s deadly politics, Nahri and Ali, now safe in Cairo, face difficult choices of their own. While Nahri finds peace in the old rhythms and familiar comforts of her human home, she is haunted by the knowledge that the loved ones she left behind and the people who considered her a savior are at the mercy of a new tyrant. Ali, too, cannot help but look back, and is determined to return to rescue his city and the family that remains. Seeking support in his mother’s homeland, he discovers that his connection to the marid goes far deeper than expected and threatens not only his relationship with Nahri, but his very faith.

As peace grows more elusive and old players return, Nahri, Ali, and Dara come to understand that in order to remake the world, they may need to fight those they once loved . . . and take a stand for those they once hurt.

The Nobleman’s Guide to Scandal and Shipwrecks by Mackenzi Lee

The sole heir to his family’s fortune, Adrian Montague desperately wants to be free―from his father’s high expectations; the grief of losing his beloved mother; and the constant war being waged inside his mind. Adrian was diagnosed with hysteria at a young age and it’s always been kept a secret. But when he has a breakdown at his engagement party, the public learns Adrian’s worst fear: he might not be fit to run the Montague estate.

Thankfully, Adrian is given an opportunity to avoid the impending scandal: a trip to the Caribbean to claim the last of his mother’s possessions. But along the way, Adrian discovers another secret lurking in his family tree. He is actually the youngest of three children―his sister Felicity and brother “Monty” went missing over a decade ago. Now Adrian has the chance to find them and offer to pass the estate back to the rightful heirs.

Adrian expects to win his long-lost brother over with the promise of wealth and inheritance, while dreaming of a quiet life where Adrian doesn’t feel like a burden to anyone. But when Adrian finally tracks him down, Monty refuses to return home. The only thing he can convince Monty of is to accompany him across the ocean as an act of tribute to their mother, hoping that during the voyage he can persuade Monty into taking the weight of inheriting the estate off his shoulders.

When they reach their destination, Adrian and Monty find something hidden in their mother’s belongings―a clue pointing to a valuable artifact that could potentially save the Montague siblings from a curse that threatens their lives. But to retrieve it, they must chase an infamous myth through the wild sugar fields of Barbados to the haunting streets of New Orleans to mysterious uncharted islands off the edge of the map.

The Lost Book of White by Cassandra Clare and Wesley Chu

Magnus Bane, a centuries old High Warlock, has taken possession of one of the great relics of the supernatural world, a powerful spell book of dark magic known as The Book of the White and there are many who want to claim it for themselves.

After the Mortal War where the part-human and part-angel Shadowhunters teamed with the part human-demon Downworlders to fight against the incursion of an army of demons, Magnus and his new lover, the mortal Alec Lightwood celebrate their survival and victory by escaping the supernatural battlefield of New York City by touring the world, but the world won’t leave them alone.

What releases are you anticipating in 2020? If you’ve made a post about it, leave it linked below and I’ll check it out. If not, just leave a comment telling me your anticipated releases. Lets chat about books!