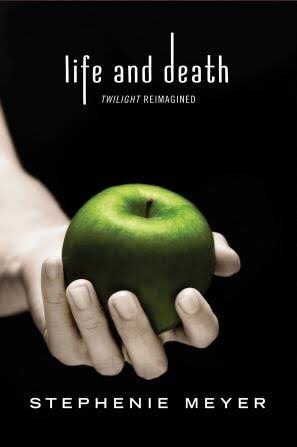 Life and Death: Twilight Reimagined by Stephenie Meyer
Series: The Twilight Saga, book 1.75
Genre: Paranormal
Published by: Atom
Pages: 380
Format: Hardback
Release date: 6/10/15
Rating: ★★☆☆☆
Where to Find: Goodreads | Book Depository
Summary: There are two sides to every story…. You know Bella and Edward, now get to know Beau and Edythe. When Beaufort Swan moves to the gloomy town of Forks and meets the mysterious, alluring Edythe Cullen, his life takes a thrilling and terrifying turn. With her porcelain skin, golden eyes, mesmerizing voice, and supernatural gifts, Edythe is both irresistible and enigmatic. What Beau doesn’t realize is the closer he gets to her, the more he is putting himself and those around him at risk. And, it might be too late to turn back…. With a foreword and afterword by Stephenie Meyer, this compelling reimagining of the iconic love story is a must-read for Twilight fans everywhere.

*WARNING: THIS REVIEW WILL CONTAIN SPOILERS*

I am a huge fan of the Twilight Saga, so I was so excited to read this, and I’m sad to say that I didn’t really love it.

Pretty much the only thing I liked about this was the fact that it was based off Twilight, so it gave me some Twilight feels while I was reading it. Other than that, I didn’t like anything else about it.

The whole idea of swapping the genders of all the characters sounded really cool when I first heard about it, but actually reading it, it was just really weird. I know Twilight so well, so every time someone said something in Life and Death, it just felt wrong. Beau would say something that Bella said in Twilight and it would just jolt me out of the story because I pictured Bella saying it and not Beau. I just couldn’t wrap my head around everyone being the opposite gender.

The other main thing I really didn’t like was the ending. I feel like the characters weren’t actually different enough to change the way the story ended, which left me feeling like Stephenie only changed the ending so that Beau could get to be a vampire like Bella, but without going through the other 3 books. I felt like Stephenie just used the last 2 or 3 chapters to just go through every story Bella hears about Edwards family in books 2, 3 and 4, so that Beau could know everything by the end of just one book. This just made the end feel so rushed and forced to me. It was like Stephenie didn’t want to do a gender bent version of the other 3 books, so she just shoved it into the last 3 chapters instead. Beau learnt the vampire history and everyone’s backstories in 1 chapter, and then suddenly the wolves were there, with the whole thing about the treaty being broken. I also felt like the wolves backed down way too fast. They didn’t take any where near as much convincing as I would have thought they needed.

Overall it was weird and the ending felt rushed. I really want Midnight Sun.