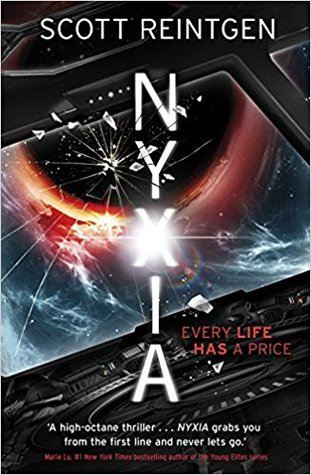 Nyxia by Scott Reintgen
Genre: Sci-Fi
Published by: Penguin
Pages: 371
Format: ARC
Release Date: 21/09/2017
Rating: ★★★★★
Where to Find: Goodreads | Book Depository
Summary: Emmett Atwater isn’t just leaving Detroit; he’s leaving Earth. Why the Babel Corporation recruited him is a mystery, but the number of zeroes on their contract has him boarding their lightship and hoping to return to Earth with enough money to take care of his family.

Before long, Emmett discovers that he is one of ten recruits, all of whom have troubled pasts and are a long way from home. Now each recruit must earn the right to travel down to the planet of Eden–a planet that Babel has kept hidden–where they will mine a substance called Nyxia that has quietly become the most valuable material in the universe.

But Babel’s ship is full of secrets. And Emmett will face the ultimate choice: win the fortune at any cost, or find a way to fight that won’t forever compromise what it means to be human.

I received an ARC of Nyxia in my Illumicrate box and as soon as I saw it, I was so excited to read it. I really enjoy sci-fi, but I hardly ever read it.

Nyxia was packed with action. It was so engaging and compelling. I never wanted to put it down, and every time I did, I couldn’t stop thinking about it. It was fast paced and had great diversity.

One of my favourite things about this book was the competition aspect and the fact that it had the leader boards all through it. It reminded me of Ready Player One, which I loved. The characters competing against each other to win the right to go down to Eden was really interesting to read about. It was exciting and action packed, and I really enjoyed all the strategies they used. I thought they were really clever and sometimes entertaining.

I really liked the main character, Emmett. His voice took me a bit of getting used to at first, but once I got used to it, I really enjoyed his perspective. I found the way he thought and the way he would file things away in his brain really interesting. I also really liked all the other characters, especially Kaya and Bilal. I loved the dynamic the group had when they weren’t competing against each other.

One of my favourite things about sci-fi books and books set in the future is seeing the different ideas people have for what technology might be like in the future. I thought some of the stuff in Nyxia was pretty cool. I really liked the idea of a mirror that told you your vital signs when you looked in it.

Overall I really enjoyed Nyxia and I’m really sad I now have to wait for the next two books. I just really want to read them now.